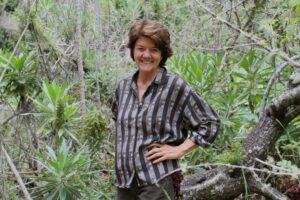 My roots were put down deep in the richness of the Georgia Coastal Plains. My parents told me I could be anything I wanted, and I believed them. Their strength of character and intense individualism required me to find my truest self.”

Marcelina Martin was born in Atlanta in 1950. She grew up riding horses on her Grandparent’s tobacco farm. Living close to the land nurtured a strong sense of wonder and an eye for the magic of Light. Her grandmother was a poet, healer and musician. Marcelina’s love of photography began at Baldwin High School in Milledgeville. She could be found down by the river on her horse Lucky or parked in the town cemetery reading poetry where Flannery O’Connor rest nearby. Originally a French major in college, Marcelina quickly realized art was her true love. She changed her major to photography. Several US photographers interested her but her final choice was John McWilliams, a protege of Harry Callahan, who taught at Georgia State University. She graduated with a Bachelor of Fine Arts  in 1974.

During her years in Atlanta she was involved with the Women’s Movement and Civil Rights, documenting events of each from 1969-1975. In 1972 she traveled with John Lewis and Julian Bond in Mississippi as a videographer for a documentary on Black Voter Registration. Drawn deeper and deeper into Buddhist studies  she moved to Boulder, Colorado to attend  Naropa Institute in 1975.  Her studies of Buddhist psychology and  with performing artists like Meredith Monk and Anne Waldman later influenced her ideas of art as spiritual practice. From 1979 until 1992, she lived in the San Francisco Bay Area where Marcelina immersed herself in the Women’s Spirituality Movement. She sat for twelve years with the San Francisco Zen Center, Green Gulch Zen Center, and Hartford Street Zen Center. In 1981, she began leading women’s spirituality groups and Dream Theater with Hallie Iglehart Austen, author of WomanSpirit: A Guide to Women’s Wisdom and Heart of the Goddess. During this time Marcelina  crafted a process she named Photomythology from a synthesis of her understandings of mythology in Neolithic cultures, of Dreamwork of the Senoi Tribe in Malaysia and of the principles of Holistic Healing. Her photographic sessions combined spiritual wisdom with the power of visual imagery.

In 1981 Marcelina met Elsa Gidlow. Contact with Elsa was an ongoing conversation about love, philosophy, art and community. This friendship changed the course of Marcelina’s life for it changed her dreams. Elsa had shared generously her wisdom from eight decades of an amazing life. The connecting thread was a fierce passion for the artist’s life. When Elsa died in 1986, Marcelina served as co-executor of Elsa’s estate and created Druid Heights Artists Retreat. During the years as Executive Director of the artists’ retreat, Marcelina’s passion for artists’ community grew deeper and eventually led to her creating Wild Hearts Ranch retreat in Taos, New Mexico.

Marcelina speaks of her art this way:

My photography developed along several paths: recording activist history, exploring visually the profound connections between the inner and outer landscapes, and using art as a tool of spiritual practice for psychic and psychological transformation. Photomythology evolved from the observation that America is primarily a visually oriented culture. The way we perceive reality is influenced by a complex range of imagery. Heroes and myths are intricately woven into our psyches. Our ideas of individual identity, social place, and interrelatedness coalesce from this matrix of images. Some of the most adverse effects of this visual information are submerged in the unconscious, leaving many of us adrift, unaware that we are in its undertow. Women are particularly vulnerable to manipulation through imagery due to the degree of sexism in our culture. Over thousands of years, our experiences of authentic womanhood have been erased from the public domain and replaced by fabrications designed for exploitation. Even if we consciously reject negative images, their power can influence us subconsciously unless we change them at a deep level. If not brought to light and examined, our images evolve into private and eventually public myths and standards. Images we hold are the foundation for the content and action of our lives. Through inquiry into our inner imagery, we can expose outdated myths, produce life-affirming images, and cultivate a dynamic vision of wholeness. In consciously creating our imagery and mythologies, we affect our political, economic, and social attitudes which inspire change first in our inner world then eventually our outer world. From this philosophical base, I created images from the myths of our lives with an intention of integrating the fragments into a whole, dynamic vision of ourselves. 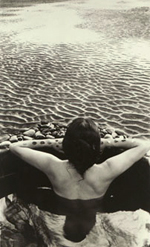 The roots of art are in shamanism. The shaman was a healer in her/his community that worked with the individual and collective psyche through art. Many artists work directly with this knowledge of the power of imagery. This is the focus and drive behind their art. I am one of these artists. When we create art, we enter into the realm of the Divine. In this place we can bring our deepest fears, conflicts, hopes and joys and emerge purged, healed and connected. My dear friend poet Elsa Gidlow believed that we were all artists. Definitely there are cultures like Bali where most people express themselves through art. I also believe that we are all artists. I believe we can all live life through our creativity. The artist  is called to art with a compelling force that draws her creativity into existence. There is no choice but to create. I believe passionately in art as a healing force and that art arises from well-being or from the innate force within all life to move towards wholeness.

Ms. Martin’s photography has been published in numerous periodicals such as The Great Speckled Bird, Frontiers, Heresies, Southern Exposure, Woman of Power, Sage Woman, The Advocate, On Our Backs, Motive Magazine, 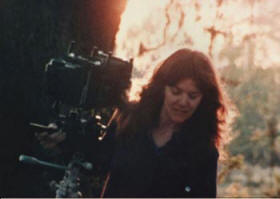 Calyx and such books as: The Southern Ethic, Women See Woman, Our Right To Love, Womanspirit: A Guide to Women’s Wisdom, Women & Aging, Elsa: I Come With My Songs, Blue Calendar, The Womanspirit Sourcebook, The Once and Future Goddess, The Heart of the Goddess, Rebels, Rubyfruit and Rhinestones, The Box: Remembering the Gift and Women Artists of the American West. Her prints have been exhibited in Australia, Germany, Denmark, and throughout the United States. Ms. Martin’s work is included in the Women’s History Archives Collection at Harvard University and Brown University. Her images are being used in online courses at Columbia University, University of New Mexico, and Purdue University.  Her book, Lesbian Sacred Sexuality, is used at California Institute of Integral Studies in the Women’s Spirituality Program. Since 1976, she has divided her time in the California Bay Area, Santa Fe, Taos and Boston. In 2002, she returned to Milledgeville, Georgia to be closer to her family. In Georgia she taught digital photography at Andrew College and  promoted the Performing Arts of India in America with Ganesh Academy of Indian Arts. Her book, “A Guide to Flannery O’Connor’s Georgia” by Dr. Sarah Gordon and Craig Amason published by The University of Georgia Press came out in April 2008. Since Ms. Martin’s  travels in India in 2007, she has been producing both promotional and documentary films. Her documentary website is at Two Spirit Films.  Promotional films on this site include The Living Dharma, Raw Detox, Archetypal Patterning, Preserving Gohn Dagow, Pure Water for India.  Her film, Mining The Unconscious, is a documentary of artists who integrate spirituality and art. The World Premiere was in Dharamshala, India. Mining was also screened in twenty other festivals including the Santa Fe Film Festival and the Foundation of Universal Responsibility His Holiness the Dali Lama. Short films include Odissi Indian Classical Dance, and Healing Through Raw Food. My Mother’s Daughter is still in production. It is the journey of a group of African-American women discovering and reconciling their African roots. We are blessed to have Desmond Tutu’s daughter Naomi Tutu in our cast. Ms.Martin has also worked as a cinematographer in short and feature films in Santa Fe. After researching the life of Irish Revolutionary, Ella Young and her connection with Elsa Gidlow and Druid Heights Community above Muir Woods in Marin County, California, Marcelina is producing and directing a feature-length film called Chains of Fires.

Shamanism: The Beginnings of Art

Female shamans came to the forefront of the practice in ancient China or Japan, Korea, South Africa, Okinawa, the Philippines, from northern California to southern Chile. Female shamanism  is a widespread tradition “.

Inspiration and connection to Spirit and Place weave through all my films. Bringing all people together in a sacred bond of love , respect and community is my strongest guiding principle.

In the spirit of honoring women as healers and artists as their descendents my films offer  healing, wisdom and magic.